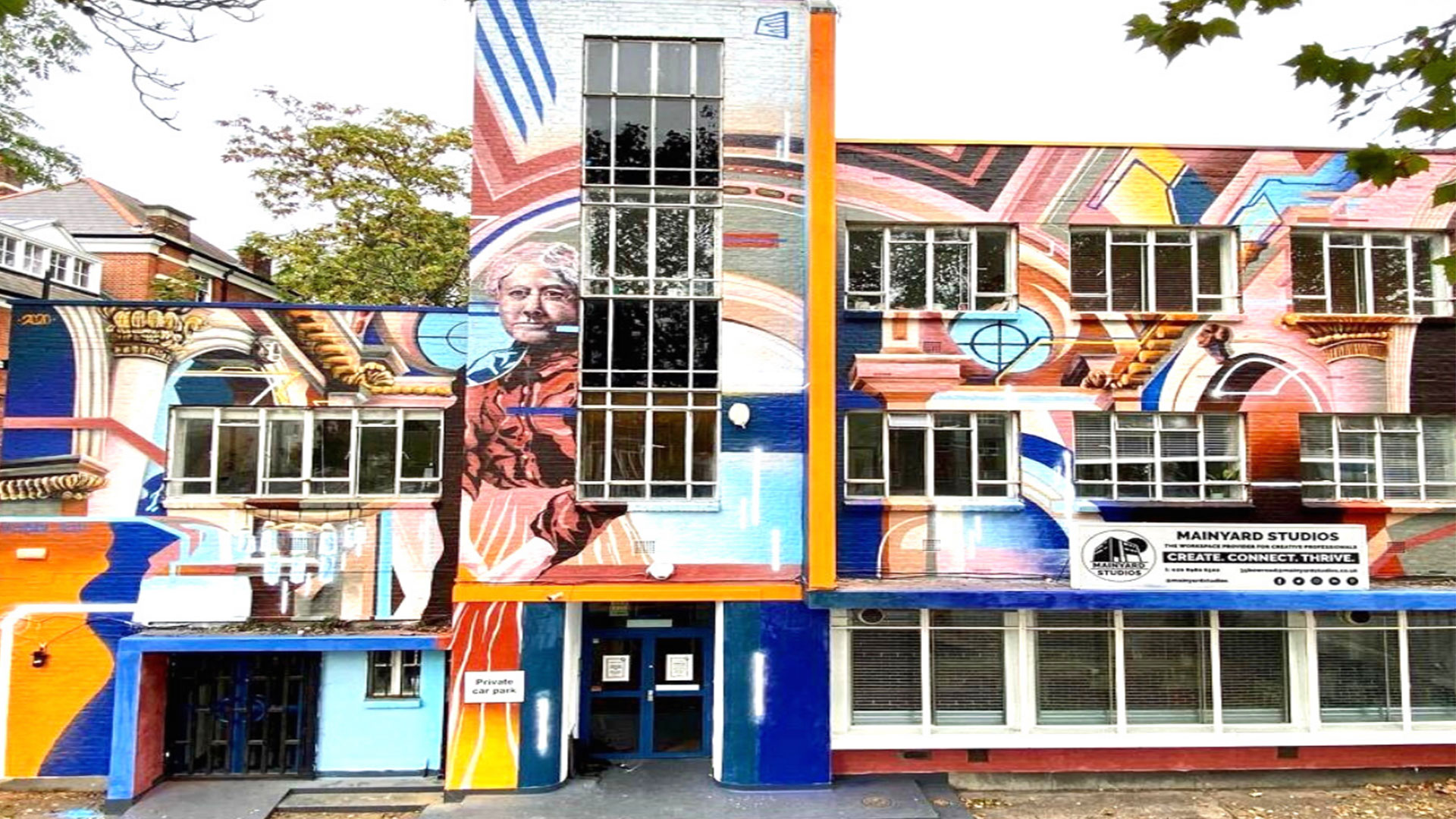 Posted at 08:47h in Uncategorized by Tori
0 Likes

If you are a Londoner, we bet that you’ve heard before that East London is known for its diverse street art scene making it the perfect spot to hunt for artsy murals. Brick Lane, Chance Street, Scalter Street, Ebor Street are some of the famous streets that host vibrant mural masterpieces painted by international artists. As part of London Mural Festival, we’ve decided to let Jake Attewell to give a face to our Mile End co-working space as part of London Mural Festival. What’s more, Itaewon sheds light on the history of East London by integrating in his design Clara Grant and the inside of the Bow Church. 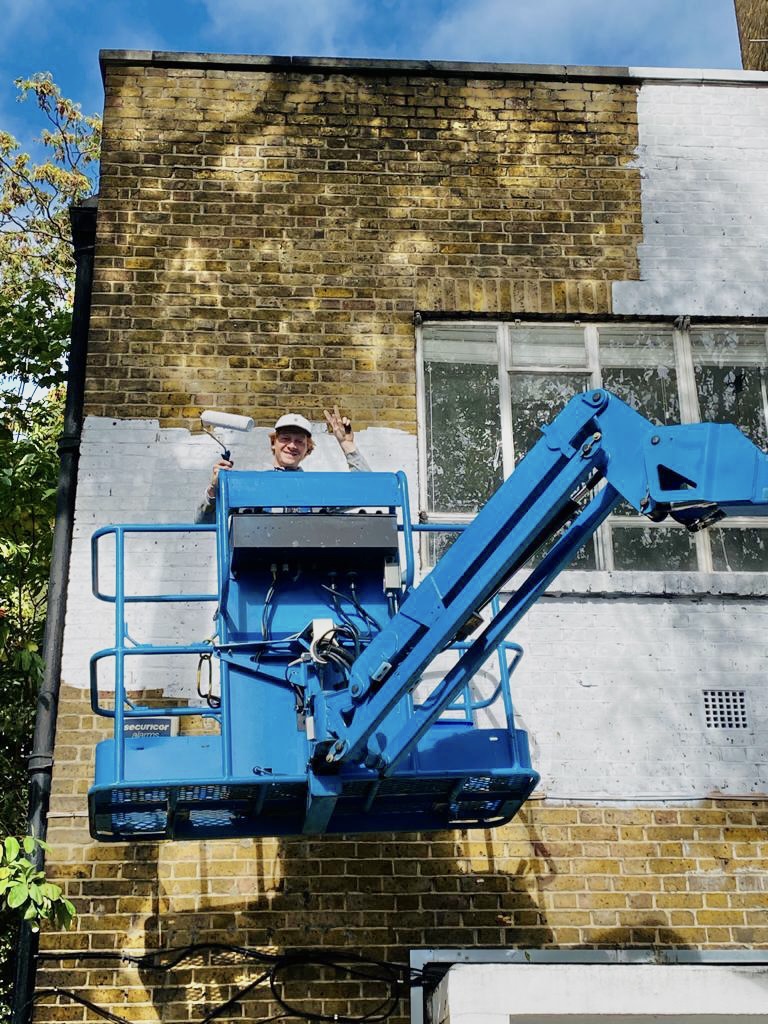 Itaewon was the area that I lived in while growing up in Seoul. When I left, my friends all moved back to the USA so I don’t see them anymore. Itaewon was home for those years and I guess I wanted to immortalise that time because it was very informative and the friends I had were special.

I’ve always been arty, since I was really young, but I remember realising that I was passionate about it in high school. My friends and I would spend our lunch break working on paintings in the art classroom and we inspired each other to explore different creative pathways. I think that’s where it all began, during lunch break in the art classroom.

In the past, I wouldn’t plan my pieces, I would improvise everything. It’s only recently that I have begun working from reference photos I’ve taken and abstracting them. I usually photograph architecture and people, nothing too deep or meaningful. If I see beauty in something, I usually have to explore it through painting.

I was contacted by Global Street Art to participate in the festival and couldn’t say no!

I wanted to take a landmark of bow and abstract it while paying homage to the history of the area. The piece consists of the inside of Bow Church, and a woman named Clara Grant. Clara used to give out charitable packages to the poor working kids in the area during the early 1900’s and also as a head teacher, pioneered for free milk for the kids. She sounds like she lived a humble life while helping the poor and vulnerable so I thought her a good candidate for the piece. 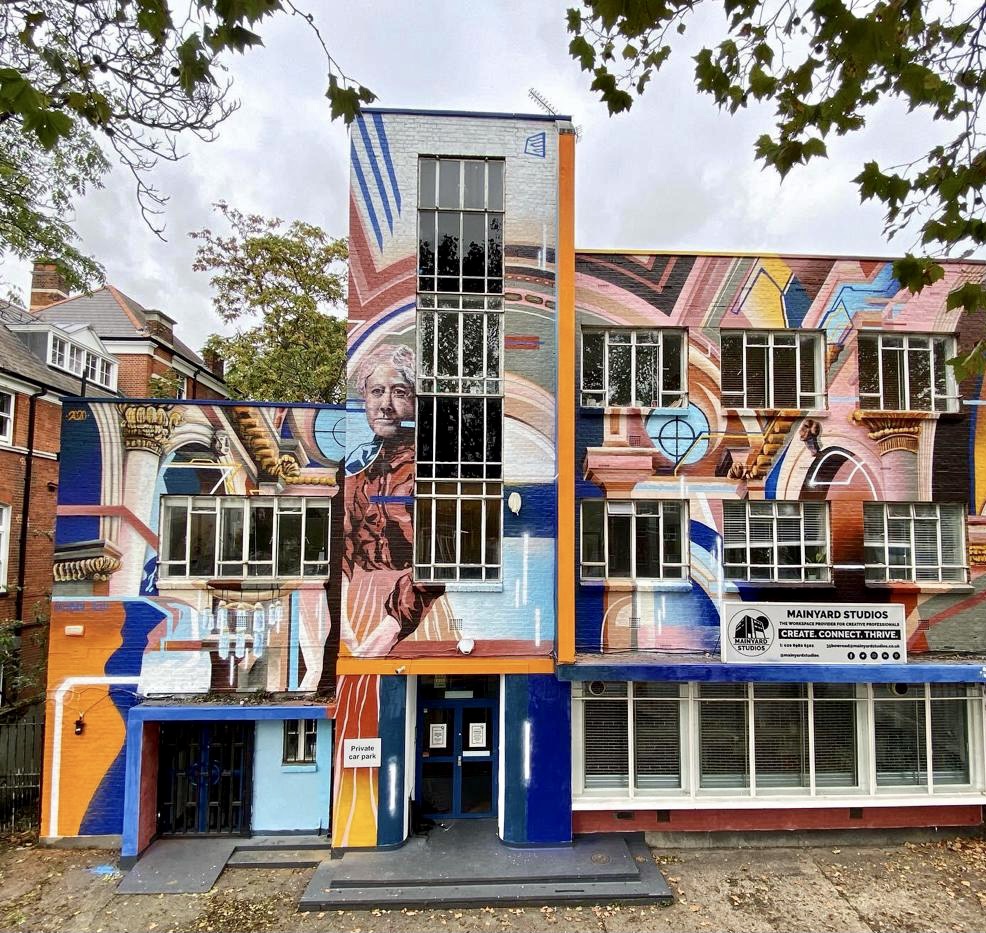 The weather. There are always setbacks on a project and you have to constantly adapt but nothing is as painful as watching your mural run down the wall in a surprise downpour.

It all changes so fast it’s hard to keep up! I don’t have a specific mural in mind, but I do love Fanakapan’s work, his process is awesome and he’s always refining it. Nice guy too!

I would like to see more big walls being painted like in other European cities. LMF is the first of its kind in London I believe, and hopefully it creates more of a buzz around street/public art. Also, graffiti is super important and should be given way more credit. Most of the really incredible muralists/artists come from a graffiti background, not street art or fine art.

My favourite artist of all time is the late Robert Proch. He sadly passed away last Year but I would have loved to collaborate with him. He’s not as well-known as he should be at the moment, but people will study him in the future. I would daydream about creating paintings like his before I knew he existed and so when I found him his work totally blew me away. R.I.P Robert Proch

Like I said, my work has never been particularly conceptual. I’ve always just painted what I thought was beautiful and there was never much as far as evident subject matter. I’m not sure where I stand particularly as far as genres or movements either because I’m transitioning from painting pure abstract to abstract realism. My past work was always exploring ways to break linear perspective and was heavily influenced by graffiti and architecture, but my recent work is more about people and places.  As I’m maturing as an artist I’m noticing I feel a need to subtly express more of my personal feelings, and I think that comes with confidence and experience.